Something was wrong.  It was obvious from the rattling from the rear of vehicle the driver would have to find somewhere to stop.  The Sat-nav showed a place nearby and with the expertise gained from many years on the job he slowed, joined the general flow of traffic and headed through the swirling snow towards the glow of electric lights. 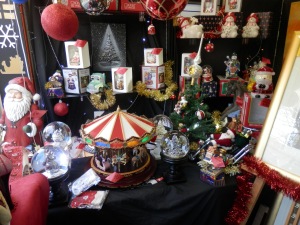 “This will do me nicely,” the driver said, and guided the vehicle to the left lane listening for the tell tale rattle over the blaring horns and screeching tyres as other vehicles swerved to avoid him.  He slid on the wet surface muttering a few “Oh dears” when the snow battering at his windshield obscured his view.

“I need lights for this sort of stuff,” the driver said, “The one up front is not enough down here.”

However, he managed the maneuver, passing trucks and cars, swerving and turning until until he was close to the off ramp and slowed to clattering, slithering stop in the car park.

He had stopped beside a large, brightly lit Christmas tree that looked so pretty in the falling snow he smiled with pleasure. “That’s nice, it looks like being a White Christmas,” he said, and clambering from his seat he examined the vehicle.  “Yep, thought so,  rear runner broken,” he said.  “Oh well, nothing for it but to sort it out now.”  Pushing his cap closer over his ears as he stood up he walked to the front of the vehicle.  He had a spare section and it would not take all that long to fix it.

He opened the tool box, selected a set of spanners, some grease and unstrapped the spare section from the foot space.  Whistling happily he carried it to the rear and, ignoring the whirling snow, dropped on to his knees, grunting with the effort, and shoving the leather jack under the chassis he pumped until the section was clear and began to remove the broken parts.

Traffic Officers Barnes and Smith reacted to the confusion smoothly and efficiently; Smith at the wheel and Barnes calling in to report.

“Investigating an unlighted truck heading west swapping lanes, traffic slowing, we are two miles east of Clackett Lane.  Weather poor, snowing,  time, 22:47.”  Barnes said and looked across at her partner who nodded. She put the lights on as Smith moved the car on ahead.  Amazingly there was no crashes, no incidents, except for some motorists and truck drivers readjusting their position on the road ahead.

“Lucky the traffic is fairly light,” Smith said as he drove, a little faster to catch up with whatever was causing the trouble.  Clackett Lane Services loomed up ahead and in the lights they saw a vehicle showing only one bright red light disappear along the entry road and head for the truck stop.   Smith slowed and cruised into the parking lot and stopped.

“We have followed a vehicle, we believe it is a truck, into Clackett’s services.  It is showing no lights, and seems to be an open top.  Investigating, time 22:53” Rachel said into the car mic.  It was snowing steadily so they donned their protective clothing and locating the vehicle they walked to where it was parked.  What they saw shocked them.

“I don’t believe it!” said Barnes.

The old man was greasing the bolts afresh to use with the new rear section when he noticed two pairs of black boots and uniformed legs close beside him.  A male voice, giving an attention getting cough, spoke from up above his right shoulder. “Er, excuse me, but what on Earth are you doing?”

He turned his head, looked up to where the voice came from and smiled broadly.  “Replacing this section, it was broke,” he replied.

“I don’t believe it!” exclaimed a female voice from his left.

“But this is certainly out of order,” said the male voice.

The bearded old man laid his tools down on the ground and looked up at the speaker taking in the uniform, the coat and hat, whitened with a thin dusting of snow, he smiled broadly.  “Soon be finished my lad and then I will be off again,” the old man said, chuckling happily.

“I really don’t believe this!” repeated the woman who, uniformed in a similar manner to her colleague stood shaking her head trying to make sense of the rig parked with one side jacked upon what looked like a pair of bellows.

The old man chuckled again and quickly fitted the new section, tightened the bolts, and satisfied with his work, deflated the jack, folded it up and stuffed it in the front along with the tools.  “Munch away lads,” he said and walked the length of the rig to the front checking harness, handing treats out to warm muzzles and turning to the the two highway patrol officers said: “Just look after this lot will you? I’ll be back in a few minutes.”  And with another warm chuckle he waddled off toward the main building singing in time, and sadly out of tune with “A White Christmas” that wafted out of the muzak speakers.

Seconds later Smith followed. “Hey! You can’t just go like that sir, I need an explanation.”

The old man stopped for a moment, and with another huge grin said:  “What’s to explain?  It’s a perfectly ordinary sleigh, with a perfectly ordinary team of Reindeer pulling it, oh, and I apologise for the poo but even Reindeer have to do it you know, and I had to stop somewhere to repair the rear runners. What’s the trouble?”

“Well, er, did you er use the road?  The M25?  Out there?” Smith said pointing in the direction of the busy motorway.

“Well yes, of course, eventually,” the old man said.  “Why? What’s wrong, everybody else was.”

Smith gulped and said.  “Animals are not allowed to use the Motorway.”

“Oh, in that case I won’t use it when I leave, well not for long anyway,” the old man said and waddled to the men’s room followed by the embarrassed officer.

“I’ll have to check the vehicle for roadworthiness,” Smith said lamely, aware that he was talking about a sleigh and a team of Reindeer, one of which had a glowing red nose.  “I’ll wait for you then?”

“Ho, ho, ho, you could get me a Big Mac and a coke,” said the old man and added cheerfully,  “and a portion of french fries to go.”

Smith, bemused, feeling compelled to obey, did as he was bid and met the old man coming back handing the bag to him watching as the burger disappeared into the bewiskered maw, the coke guzzled, the chips scoffed, and the rubbish dutifully deposited in a bin. The old man burped, wiped his mouth with the back of his hand and walked on.  “Ah, that’s better.  I don’t eat all the mince pies.  They make me fart,” the old man said and hurried down the steps to the car park.

Barnes was stroking one of the Reindeer, a glazed look on her face muttering “I don’t believe it.”  She looked up when the pair approached and pointed to the ground underneath the animals. “Look, Reindeer poo!”  The little piles were steaming in the cool air.   But Smith was not a happy officer; he had seen the lack of lights, registration stickers, nets and straps needed to secure the load and decided this was serious.

“Sir, do you realise your vehicle does not comply with heavy goods regulations in any way that I can see,” he said, and stopped in mid sentence unsure if a sleigh required number plates, road fund licences or any of the usual paraphernalia.  He was sure it shouldn’t be on the Motorway.  “Officer Barnes, will you stop fondling the animals and do a check on this vehicle for me?”

She turned to face him. “Smithy, you idiot, do you know who this is?”

“Er, no idea, as long as he doesn’t take that lot out on to the M25 I don’t really care much.  His vehicle is overloaded, the load is unsecured, and, er I er…” he paused and looked at the old man who was clambering up on to the sleigh taking the reins in his hands as if he was about to move the rig off.  “Excuse me, but  we haven’t finished.”

“Smithy you idiot let me…” Rachel Barnes said, and moved to the side of the sleigh.  She looked up the old man her face aglow and spoke softly to him.

“Have you been good, miss?” said the old man.

“Yeth,” she answered, and dropped her head in child-like embarrassment.

The old man reached down beside him and leaning close gave her a parcel wrapped in tinsel and pretty paper with a red ribbon around it and a label flapping in the chilly breeze.  She took it and looked up at him, her face alive with pleasure and said. “Er, tank you.”

And with a clatter of sharp hooves and the scrape of wood on tarmac the sleigh disappeared into the night, accelerated along the on ramp, joined the traffic and was gone.  Hanging in the air was the last sound of the old man’s voice calling out “Ho, ho, ho! And a Merry Christmas!”

The writings of a dedicated cat lover

Through The Glass Darkly